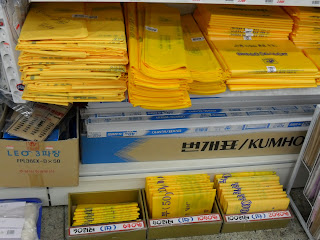 Specialized bags are also available for wet food waste. For disposal of large objects, a sticker must be purchased from the county or city district offices. The price of the sticker varies by municipality based on the type and size of the item being thrown out.

The cost of purchasing these bags is intended to pay for the garbage disposal, but in fact it aids environmental efforts to reduce the overall level of garbage being thrown out. Because each household has to pay a premium for each garbage bag, they are less inclined to throw otherwise recyclable or compostable objects into the trash, lest they fill up the bag more quickly. Violators of the system face a fine of 500,000 won.

Concerns can be raised about the environmental effects of the production of these bags, as opposed to using a system of bins for trash collection or allowing the re-use of bags used to carry grocery store items home. According to the 2003 Korea Environmental Policy Bulletin, the composition of VBWF bags are PE (polyethylene), PE with more than 30 percent of biodegradable resin (bags used for food waste compost) or PE with more than 30 percent of calcium carbonate (for trash that is incinerated). In 2002, reusable VBWF bags were instituted, and can be purchased at grocery stores to carry purchased goods and later be used as regular VBWF bags when disposing garbage. The use of vinyl bag to carry purchased goods can thus be reduced.

Could this be replicated in US cities or around the world to incentivize recycling? Though folks may initially bristle at the thought of having to buy expensive trash bags, one must admit the system that's been designed is quite ingenious: people pay only for the trash they expend, and an ethic of staunch recycling and composting now exists.

"With the implementation of VBWF, consumers are realizing more that “disposing waste costs money” and consumers' interest on reducing waste has grown. For example, consumers are showing more preference to refillable products, which generate less waste. They are also refraining from bulky packages and use of shopping basket has increased. Producers have, in turn, become more environment-friendly. More producers are producing refillable goods and reducing the layer of packages in their product because they realize that consumers are more and more preferring these kinds of product. Moreover, recycling industries are being expanded and they are leading development of biodegradable vinyl bags." (2003 Korea Environmental Policy Bulletin)

Whether it's done for environmental or economic reasons, we all win.
Posted by Renew Cities at 10:00 PM