A Bike, When You Need One

How many city folk have experienced the sudden need to get to another part of town, and quickly--the race is on, you think, as you calculate the time it will take to get your car out of the parking garage or flag down a taxi. "If only I had a bike right now," you lament, "I could just hop on and zip over."

Luckily for the health--and perhaps sanity--of urban dwellers, the system of bike sharing has caught on, and is spreading. 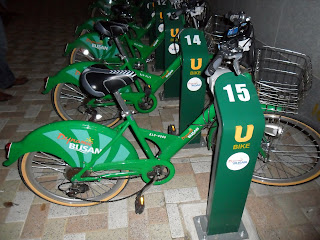 Yesterday, I was strolling in Busan when I ran into my first U-Bike stand. An inconspicuous rack of about 25 bikes with a screen kiosk made it easy for pedestrians to hop on and ride off to another part of the city (which, I must say, experiences snarling traffic rough enough to put a Manhattan-bred driver ill at ease).

The U-Bike stand in Busan is one of eight pilot programs in Korea, modeled after South Gyeongsang's Nubija (Nearby Useful Bike, Interesting Joyful Attraction) program of 20 stations, 430 bicycles for rent and over 3,000 users a day. Nubija, in case you're curious, was modeled after Paris' Vélib' program that launched in the summer of 2007 and now boasts "1,750 stations across the city and neighbouring suburbs [and has] a maximum of 24,000 bikes in operation at any one time," according to a 2010 Guardian Article by Leo Hickman.

The Korean government wants to increase bicycle use (from 1.2 to 5 percent) and ownership (from 16.6 percent to 30 percent by 2012), and is willing to put significant resources towards this goal--something that will have positive trickle-down effect in other arenas:


"The Ministry of Knowledge and Economy said in May that it will establish a high-tech bicycle research and development network in Daedeok, South Chungcheong. And manufacturing complexes exclusively for bicycle parts and materials will also be erected in Suncheon, South Jeolla, and Yeongcheon, North Gyeong- sang. The complexes in Suncheon and Yeongcheon will specialize in new materials and parts to make bicycles lighter and stronger. President Lee recently said about the program, 'Korea was a latecomer in automobile manufacturing, but after 20 years Korea has become one of the world’s top five auto manufacturing countries. Korea may be depending mostly on imported bicycles, but in fewer than five years Korea will likely be one of the three major bicycle countries in the world.'" (Korea Magazine, July 2009)

Though not free, as most bicycle share programs (with the exception of Mexico City's Mejor in Bici/Better on Bicycle), the U-Bike initiative will incentivize uses by offering discounted bus and subway fares when riders transfer from bicycles.

So, cities with these programs have seen a drop in automobile use, right? Surprisingly, the Guardian article referenced earlier claims that:


"[r]ather than get people out of cars – [the Vélib' bike program] is reckoned to have substituted only about 10% of car trips in central Paris – it has done a far better job of getting people off public transport. As many as half of all Vélib' trips are estimated to have replaced Metro or bus journeys."

Whether intentional or not, London's Cycle Hire introduction video reinforces the concept of simply replacing public transit with their bike program. The narrative goes something like this:


"So, there you are, walking around London, enjoying the open air when you suddenly realize that you really need to be moving a little quicker. You could say, take a bus, the tube, or devise some more "unconventional" means of travel--or why not try a bicycle?"

New programs may want to consider additional incentives (such as placing bicycle stations near employment centers that are near, but not within walking distance to public transportation) that would entice automobile users to turn in the car keys for the bike pass.

Additionally, some bike share programs have had to contend with drops in usage as the purchase of motorcycles and scooters increases. According to an article by Treehugger, Barcelona's Bicing program saw that:


"[while] the number of Bicing stations increased from 390 to 419 [in 2009](an impressive increase), the number of Bicing trips fell a whopping 12.5%...in the middle of a recession. Things got even worse between June 2009 and June 2010 - if these statistics are correct: the Bicing service lost 74,000 users in the course of that year, going from a high of 191,000 to a low of 113,000. What was the reason for this precipitous drop? The Ajuntament of Barcelona doesn't speculate in its mobility report, but there's a big clue in the data on motorcycle ownership - the same year that cycling was lagging, motorcycles increased from around 42,000 to around 64,000."

Nevertheless, the positive trend of bicycle sharing continues to grow, and has now reached the Asian markets of South Korea, China, Taiwan and Japan.

In countries with a few years of experience under their belts, the bike sharing system is evolving: last week I Tweeted about the Urbikes Trapper, an "intelligent electric bike" that will be officially presented on November 25th 2010 at Living Labs Global in Copenhagen. What makes a bicycle "intelligent" and "electric" you may ask? According to an article by Care.com,


"The cyclist will be capable of generating 80% of the energy the bike consumes, with the remaining 20% being charged at the bike sharing stations, in only 10 minutes. Moreover, the stations are planned to have solar panels so they don't have to be connected to the grid...The system's intelligent software will be able to learn the users' movements and predict where in the system bicycles are needed depending on the day of the week or time, whether it's a bank holiday or a working day."

The key for all programs will be to learn from the successes and challenges of their compatriots.

For additional information, see:
The Bike-Sharing Blog, by MetroBike LLC
Tree Hugger
Posted by Renew Cities at 4:48 AM